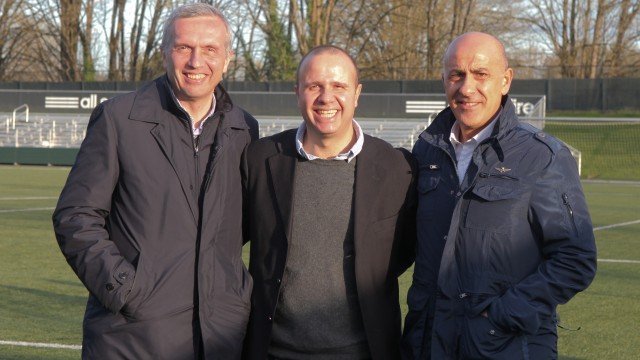 History has been made, Fiorentina Women’s FC

Giuseppe Pezzano, President of OSA Soccer Academy, had the idea of a collaboration between the Italian men’s and women’s teams for a long time. “I remember when I was in the Sheraton Hotel in San Francisco with Sandro Mencucci (ACF’s CEO) and Vincenzo Vergine (ACF’s Director of youth development).” Giuseppe Pezzano told us. “We were talking about what I was doing in Seattle with the women’s team, and I said that it would be nice to do the same in Italy with an Italian club like ACF. And now today it has become a reality!”. Then Pezzano said: “I congratulate President Della Valle for being the first Serie A to have this idea, and Vergine and Mencucci for realizing the project”.

So how did this all happen?
Below is a short interview with Giuseppe Pezzano and Cristiana Pedullà, owner of  OSA and board member of Fiorentina Women’s FC respectively, both key players in realizing this project.

Giuseppe, how did you get in touch with the former Firenze Women’s soccer club and the Serie A team ACF Fiorentina?
I met Andrea Guagni, President of a women’s team in Florence, in the spring of 2013. I had just started a new women’s soccer club in Seattle, and I offered Alia Guagni, a very talented Italian National team player, a spot on the roster.
I had been collaborating with ACF Fiorentina SPA since 2008 and we were already partners on other projects like the Fiorentina School, a sports focused high school in Florence.

You got to know Firenze Women’s Soccer during a very difficult moment for the club. What interested you, did you want to help them?
Andrea Guagni, the President, and I were in touch about Alia Guagni and other players joining my team in Seattle. Andrea told me about the difficult moment so I started to look for a solution. I had already been involved with women’s soccer in America and I was fascinated, but I also realized how big the gap was between women’s soccer abroad and in Italy, so this type of collaboration was a logical step in developing the sport.
Throughout Europe professional men’s clubs also have a women’s side. But in Italy, despite our deeply rooted soccer culture, we are behind these other countries. I thought that it could be the right moment to merge men’s and women’s soccer teams in Italy too, and Firenze was the logical starting point.

Cristiana, you have been working with OSA for a long time. How important is this project for the OSA Soccer Group, a group that is involved in every aspect of soccer – professional, youth, men’s, women’s, European, American?
I have been working with Giuseppe Pezzano and OSA as a consultant since 2004. 11 intense years have shown me how important it is to merge different soccer cultures and take the best from each in order to achieve the best results. This new adventure is a very important outcome for the OSA Group since we have always believed in developing the women’s soccer movement and always worked for that. We are just at the beginning but I’m certain that this inititative will help people get closer and more interested in women’s soccer.

What was and will be your role in this project?
I am a board member of Fiorentina Women’s FC and I will contribute under the lead of Sandro Mencucci and Vincenzo Vergine. This is great for me and an opportunity to put into practice the knowledge and expertise I’ve learned by working together with Pezzano and the OSA Group.

The OSA Soccer Group, led by Giuseppe Pezzano, has always worked to bridge American and Italian soccer. As a matter of fact, the OSA Group offers many opportunities to all soccer lovers through unique life and sport experiences, such as summer camps in the USA or Europe, Player development opportunities, team tours with friendlies against local teams and the opportunity for individuals to play on American teams and compete in leagues, showcases or tournaments, creating scouting opportunities and the possibility for players to play while attend college in America
Thanks to OSA Soccer Group, Giuseppe Pezzano will continue to develop new  ideas for men’s and the women’s soccer.